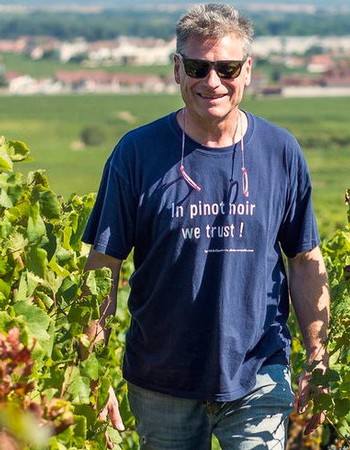 Enjoy 3 bottles of each Red Burgundy PLUS ground shipping included:

Domaine Marchand Freres Bourgogne Cote dÓr Rouge Cuvee Eline 2018
Burgundian winemakers who have been at it for generations often produce AOC Bourgogne that reminds you of the village wine where the domain is based. It makes sense, really: older domains are likely to have their vineyards circled close to home. This Domaine Marchand Freres Bourgogne fools you at first. We tend now to think of them as being based in Gevrey-Chambertin. But that is fairly recent. The domain’s roots are in Morey-Saint Denis. And when you taste this Bourgogne, that’s what you taste. A little Morey Saint Denis. Remarkable.

Domaine Marchand Freres Morey Saint Denis 1er Cru 'Faconnieres' 2018
On well-drained gravelly soil just below Grand Cru Clos de la Roche and running the length of premier cru ‘Les Millandes’ just to the south, the premier cru ‘Faconnieres’ is one of the best-situated of the many great Morey-Saint-Denis premiers crus. Add to that 50 year old vines and vinification worthy of a Grand Cru, for a minuscule production of just 1300 bottles, and there you have Burgundy at its best.

Domaine Marchand Freres Gevrey-Chambertin 'En Etelois' 2018
Butting up against Grand Cru Griottes-Chambertin, Charmes Chambertin and Chapelle-Chambertin, this Gevrey-Chambertin ‘village’ lieu-dit ‘Aux Etelois’ is justifiably famous and particularly prized here in the region. It’s what we call a ‘locals’ wine. The parcel is often bottled as a single-vineyard ‘village’ because of its intrinsic elegance. Domaine Maume (among others) also produces an excellent Etelois.

Domaine Marchand Freres Gevrey-Chambertin 'Vieilles Vignes' 2018
‘Vieilles Vignes’, old vines, have the advantage of keeping crop yields naturally low. And low crop yields mean ‘concentration’. Here we get that concentration in a Gevrey-Chambertin ‘village’ made from two contiguous ‘lieux dits’ (Pressonniers and Fourneaux) which are situated below the line of the Grand Cru to the west of the Combe Lavaux. We are talking about a classic Gevrey village spot, similar to the vineyard ‘Aux Etelois’ that is just across the way. This is Gevrey-Chambertin as we like it best.