Native to Bourgogne, Pinot Noir is a mysterious and complex varietal. It is the raw material of the greatest Bourgogne red wines, and has thus played a key role in the region’s worldwide reputation. It is the quintessential interpreter of terroir, and is capable of capturing every nuance of the land on which it is grown. It is thanks to this propensity to reflect the characteristics of the land that vinegrowing in the Bourgogne region is traditionally practiced using this single variety for reds. 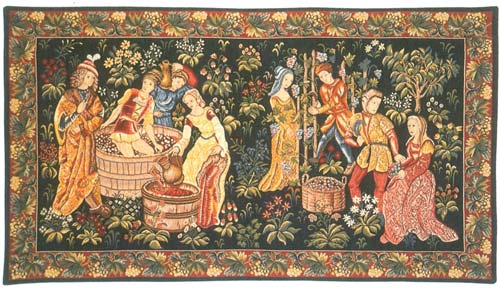 Pinot Noir is a very old varietal, and is the basis of the wider family known as Noiriens. As such, it is the father of a multitude of other varietals, including Chardonnay, Aligoté and Gamay. Only a few generations separate it from the wild vines present in the forests even before Roman times. The first written record of the varietal, under the name of Pinot Noir or “Plant Fin”, dates from 1375.

The bunches on a Pinot Noir vine are small and compact. Indeed, its name was inspired by the tight formation of its bunches, resembling a pinecone. Its grapes are fine-skinned and delicate, tinted with an intense color with bluish or deep violet hues. They yield a sweet, initially colorless juice. The leaves can be anything from light to dark green, and are divided into three or five lobes.

Pinot Noir is a capricious varietal that is difficult to grow and which is highly susceptible to vine diseases. It requires a northerly climate to thrive and express its full complexity. Pinot Noir likes the limestone soils in the Bourgogne wine region, which range from the Upper Jurassic limestone of Givry to the fossil-rich subsoil from the Bajocian age found in Gevrey-Chambertin. The Bourgogne wine region has all the attributes for the successful growing of Pinot Noir. Here, the varietal reflects the tiny variations in the terroir on which it is planted, making the range of nuances found in Bourgogne wines unique.

Pinot Noir offers a very varied palette of aromas which are a direct consequence of the terroir on which it is grown. That is why the name of the varietal is rarely mentioned on the label of a bottle of Bourgogne wine, which gives preference to its place of production. Depending on where it is grown, Pinot Noir can produce intense, structured wines, or else elegant and delicate ones. In general, several common characteristics can be found in Bourgogne wines made from the varietal:

In the Bourgogne wine region, Pinot Noir always retains a certain freshness, even in the hottest years. The length and complexity of the wine varies, according to the level of the appellation.