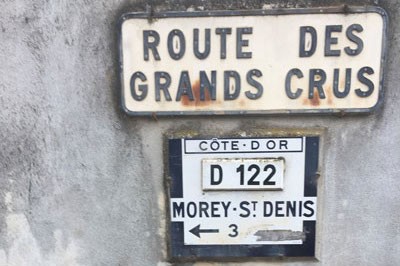 The Côte de Nuits village of Morey-St-Denis, with its emblem showing two running wolves, sits between two of the most famous names in Burgundy wine—Gevrey- Chambertin, and Chambolle-Musigny. To the south of Morey, Chambolle offers delicate wines, whilst its northerly neighbor Gevrey is known for its structured, powerful wines (favorites, too, of the Emperor Napoleon). Morey itself, on the other hand, has a less distinct character, certainly less famous - and consequently it offers some of the most affordable and best quality wines in all of Burgundy. Here, over half of all the land available is dedicated to Premiers Crus (20 of them) or Grands Crus (5), equating to just over 270,000 bottles, mostly of red. This is the highest percentage dedicated to such high-quality vines in the whole of the Côte de Nuits. Morey itself is a village of great diversity – in terms of characters, history and viticulture too. But alongside this diversity comes consistency of winemaking. Its magnificent walled Grand Cru plots draw the eye, though it’s worth remembering that in the more famous neighboring villages, land prices can be much as four times higher. That’s why Morey is one of the best places to make wine at the moment. And it’s the land that makes the difference in the quality – from the lower-lying red clay to the sparse, rockier hill tops, the vines are a direct expression of earth that has been lovingly worked here for almost a thousand years.

Almost all wines are red from this appellation, though the rare white wines made from Chardonnay or sometimes Pinot Blanc can be opulent and pleasingly firm. Only around 6 hectares are given over to white wine in this region, as opposed to 88 hectares dedicated to red wines.

Most of Morey-Saint Denis planted with Pinot Noir. Morey is known for its reds, bright ruby or intense garnet, depending on the year. The fruit is black: blackberry and blackcurrant with trademark black cherry fruit and pit. When older it is classic Burgundy Pinot, with animal notes, undergrowth, leather and truffle. Structure and balance are qualities found in all great wine, and Morey is no exception. Body, fruit, volume and length are part of the package that Morey climats offer to careful winemakers. The potential for greatness is part of the mystic of the appellation. The un-PC locals call the reds of Morey-Saint Denis 'masculine', as they are classic examples of full and powerful Cotes de Nuits. So dishes should also be strong and powerful to challenge the tannins and structure of the wine. Often game birds like pheasant are mentioned, as are roasted beef or veal.