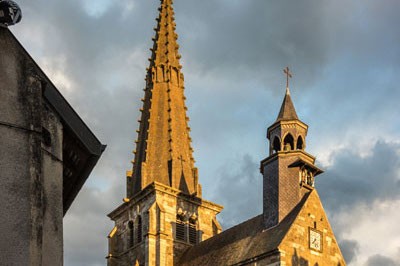 The thirsty traveller, having lunched in Dijon and travelling south through the Cote de Nuits for refreshment in Burgundy, will eventually reach Ladoix-Serrigny. It marks the start of the Cote de Beaune. That it should be associated with ‘beginnings’ is particularly apt, for the name Ladoix means ‘water spring’ in old French. Ladoix wines are not widely known, but amongst those who have tried them they have developed a devoted following. The vast majority of the wines from Ladoix’s 90 hectares of vineyards are red, though the small amount of white produced here is of the very highest quality. They share some of the most hallowed ground in all of Burgundy – the hill of Corton – with the nearby Aloxe- Corton appellation and also Pernand-Vergelesses. On the hill they benefit from better elevation towards the sun, different wind patterns and a slightly lower temperature. To the north, however, the soils are more reminiscent of the Cote de Nuits. First mentioned in 1305, and made up of properties of the Hospices de Beaune, it has a thirteenth-century church and an eleventh-century chapel. The volume of wines made here may not be huge, but the quality and historical importance of Ladoix-Serrigny more than make up for it.

The soils of the upper slopes are pebbly and red, iron-rich with a high limestone content and a good bit of marl. These soils suit white wines. Ladoix white is golden straw colored and should smell of flowers and have notes of ripe autumn fruit, plum and apple, pear and fig. They are bright on the palate, often very juicy, but show the firmness of good structure. Their minerality in not unlike the famous neighbor further up the slope, Corton-Charlemagne. Ladoix white at its fullest, suits the salty iodine flavors of shellfish and cooked seafood. Blue cheeses work, as do firmer aged goat cheeses and grainy gruyère.

Mid-slope, reddish-brown calcareous soils with abundant limestone debris produce full-bodied and flamboyant red wines. Clayey soils at the foot of the slopes take away some of their finesse, but add oomph. Ladoix red is often the color of cassis (or blackcurrant), bright garnet with deeper tints. But if you are looking for deep color, you have come to the wrong place. Ladoix is a finesse wine, long on little red woodland fruit and the first hints of Cote de Nuits cherry. It is deceptively tender and supple, but should have a depth that comes from its location rather than extraction. It can be voluminous without being dense. 'Silky' is a word often used to describe red Ladoix. Soft tannins and roundness texture go well with cured ham and delicate meats like rabbit or boiled beef. There is a fleshiness that will smooth out the spices in a curry of lamb or poultry. It goes well with mild cheeses such as Vacherin, Reblochon or Cîteaux.