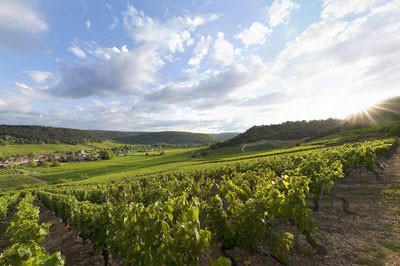 Being situated in a side-valley of the Côte de Beaune means that the climate of Auxey-Duresses is quite cool, producing a different style of Burgundy than other warmer regions. The wines are slightly shorter-lived than those of nearby Volnay, meaning there are often bargains to be had with them. The village also faces a secondary challenge—from the difficulty most foreigners find in pronouncing it (for the avoidance of embarrassment it is ‘Aussey’). Before 1924, the village was known simply as Auxey, but then added the name of one of its finest producers, Les Duresses. As with most wine producing towns and cities in Burgundy, its name and history can be traced back centuries, in this case to the year 859. A little about the geography here; these Premier Cru wines are found largely on the south- facing slopes of the Montagne de Bourdon hillside behind the village of Auxey- Duresses. On the hill of Bourdon, geologically an extension of Volnay and Monthélie, the soil is a pebbly marl-limestone mix which gives vigor to the east/south-east facing vineyard of Les Duresses. The Climat du Val, on the other hand, faces south and has very limey soil, while in La Chapelle marl predominates over limestone. And on the hill of Mélin, the fine-textured soil resembles that of nearby Meursault and Puligny, producing excellent Chardonnay.

These white wines are smooth, light and often tantalisingly rare. They are grown in soil with limestone as its base and a generally silica topsoil. They are usually a pale straw color with crystal clarity, with aromas of fresh almond and green apple, and often biscuity with a smoky, flinty minerality. Sprightly when young, they are fuller and meatier with age, with a good shot at persistence. As these wines are juicy and lively, their fruit retains fullness through a long finish and for this reason they go well with shrimp, fish in spicy sauces, as well as cooked shellfish. Lesser appellation wines such as these work particularly nicely with a dish such as Salmon with Green Apples and Horseradish. They can likewise be paired with cheeses of the Gruyère family, or a young but dry-textured goat's cheese.

This is mainly red wine country (about a 75/25 split between red and white), the reds being generally a bright ruby color of medium intensity. The bouquet is well-balanced between rich aromas of small black fruits (blackcurrant, blackberry) and floral scents. In the mouth, the attack is refined and supple, measured and sometimes meaty. When young, there may be a touch of rustic green tannins, but these soon soften and the texture becomes velvety with earthy notes, as well as leather and spice. Rich and well-moderated tannins make reds from this region ideal for delicate or white meats. Its supple attack and notes of red and black fruits give it a wide range, and it shines when paired with cold cuts, roast pork or veal, kebabs, rabbit, or pasta dishes with herbs. Grilled fish also works for the more adventurous.