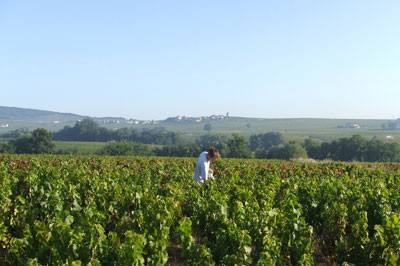 Despite the fact that it has a completely different soil make-up, uses a totally different grape variety (Gamay), and is in reality not in Burgundy at all, Burgundians have always had a soft spot for Beaujolais. Although administratively a part of Burgundy (located to its North), Beaujolais has a climate more akin to the Rhône region, which overlaps its southern flank. The Beaujolais winemakers produce their wines (98% of which are red) on land alongside the meandering Saône river. This region produces a large amount of wine per year – two and half times more than the rest of Burgundy, in fact. There is a white Beaujolais, but it, like Burgundy, is Chardonnay. Around 2,000 winegrowers inhabit the region, continuing their age-old traditions of hand-picking and vatting entire bunches of grapes and covering them with a layer of carbon dioxide. Indeed, this method— known as carbonic maceration—is one of the defining qualities in this region; the fermentation starts inside the skin of the grapes which then rupture and release fresh grapey fruit flavors.

Only around 2% of the wine produced in Beaujolais is white; indeed, the legal requirement of the Beaujolais appellation is that no more than 15% of any one vineyard must be planted with white wine grapes. Known for their freshness and lightness, they have pleasant stone fruit flavors of melon and pear. However, unlike many other white Burgundy wines, they don’t benefit from much aging, and it is usually best to drink them whilst still young, or within a few years from vintage. Some areas of the Beaujolais Blanc territory overlap with that of the southern Mâconnais, meaning that the two wines are often quite similar in character. Sometimes, this appellation may be used to sell white Beaujolais.

Red Beaujolais is broken down into four categories: the Beaujolais Cru, Beaujolais Superieur, Beaujolais Villages and the notorious Beaujolais Nouveau (which accounts for over half of total production here). In the north of the region, over mainly granite terrain, the Beaujolais Crus form a meandering path. From south to north, Brouilly is followed by Côte de Brouilly, Régnié, Morgon, Chiroubles, Fleurie, Moulin-à-Vent, Chénas, Juliénas and Saint-Amour. Many of these wines are apt for aging, and in many cases can show the structure, finesse and complexity of their neighbor to the north. Some in fact are easily confused with Pinot Noir as they age. Further south the soils turn to clay and sandstone, and it is here that the brighter, lighter early- drinking Beaujolais Villages are produced. Beaujolais complements charcuterie and other cold meats very well, as well as white cheeses which are not too ripe—this makes it an excellent picnic wine. When using in food dishes, consider a traditional Oeufs En Meurette (Poached Eggs in Red Wine sauce)—the sauce requires fruit and a good acidity, making Beaujolais a perfect choice (though to drink with the dish, try a good round Chardonnay).