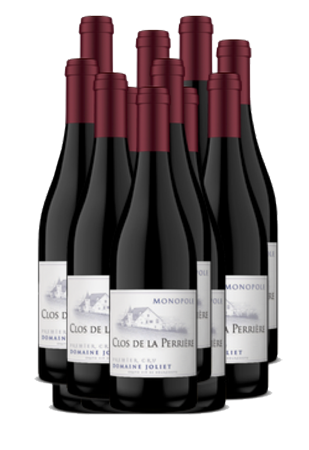 Benigne Joliet has but one mission in life: to see his ‘Clos de la Perriere’ vineyard in Fixin raised once again to the status of ‘Grand Cru’.

The Clos de la Perriere, founded by the Cistercians in 1142, is a walled-in vineyard that the monks way back when knew made an exceptional wine.

Inside those walls however, the vineyard is composed of 4 distinct parcels. And while each of these 4 parcels on its own produces an interesting wine, the four together make magic.

That the monks knew this back in the Middle Ages is not, in itself, extraordinary. They had time, and plenty of ‘ora et labora’. And as, over time, they came to know where the best vineyards were, they put walls around them.

There are lots of vineyards called ‘clos de something-or-other’ in Burgundy. The best known of course is the Clos de Vougeot. But where the Clos de la Perriere is different, unique even, is that it has never been divided up. If the idea of putting a wall around a vineyard was to enclose various parcels of land that are component parts of one great wine, then dividing and selling off parcels within a clos can only dim the original vision.

In 1855 Dr. Lavalle classified the Clos de la Perriere as ‘tete de cuvee’, the equivalent of modern-day ‘grand cru’.  But when the 1937 classifications were made, the Clos was relegated to premier cru.

But Benigne Joliet knows that it is a grand cru. Perhaps the only vineyard of grand cru stature still intact that was laid out by the monks in the Middle Ages. And he is fighting to have it recognized as such, both with the AOC people and in the cellar. Relatively unknown and poised again for greatness, this is a true Insider’s Burgundy!

Domaine Joliet Fixin 1er Cru 'Clos de la Perrieres' Blanc 2016 (3 bottles)
Great depth of maturity, with tinges of lemongrass and nuts, round but with a floral vivacity that marks it as a great white Burgundy. A unique earthy minerality carries the whole package to a lovely long finish.