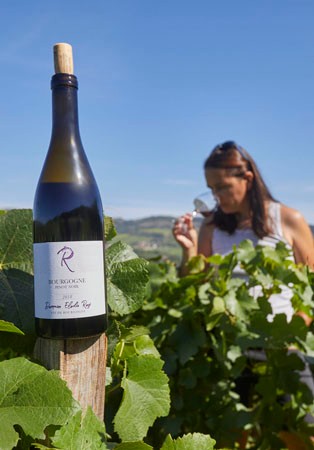 Elodie grew up in a winemaking family in Cheilly-les Maranges in the southern-most tip of the Cote de Beaune.  Her parents worked 25 acres of vines on their own, selling grapes to negociants. So Elodie and her sister helped when they could. As a teenager, she saw how hard the work was, and decided not to follow in their footsteps.

So she studied Law, and then went to work in a bank. Six months later she knew she had made a mistake. So she went back to school.  This time, to study wine. Her parents were not too happy about this turn-about and tried to convince her that there was stability in the banking sector.  But her mind was made up.

The problem was that her father was not yet ready to give up his vines. So she took a job at the Domaine Anne Gros, one of the bijou domains of Vosne-Romanee.  And there she stayed for 11 years.

Then, in 2018, at 38, she took over the family domain.  24 acres of old vines in good condition, including a parcel of 70-year-old vines that were planted by her grandfather.  Elodie says that it has been an emotional transition.

She calls it her ‘mid-life crisis’, and you can sense the fire inside her.  She has seen Burgundy winemaking from the family domain to the highest levels of world-class production.  Her philosophy is respect for the soil and sustainability in her viticulture. As do all the great producers, Elodie knows that there is no great wine without great fruit.

“Opening in the glass with aromas of plums and raspberries, this Bourgogne Pinot Noir is medium to full-bodied, bright and lively, with a pretty core of fruit, lively acids and a mouthwatering finish.”