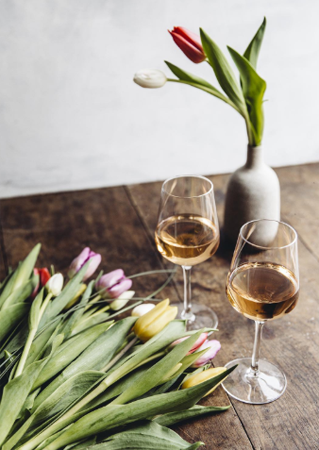 Julien worked in the early 2000s for a domain in Bouzeron, so he learned the subtleties of the grape from many of the Burgundian masters.  And of course he crossed paths with Aubert De Villaine who has a domain in Bouzeron and whose crusade to promote Aligote was gaining ground.  The Domaine De Villaine's Aligote vineyards are planted in what are known as 'massale selection' vines. As opposed to 'clones', massale selection vines are produced with wood taken from old vineyards that were planted in the days before clonal planting. This preserves the variations of the older vines which were selected for their superior quality production.  Vineyards planted in massale selection have significant varietal variation, which adds depth and dimension to the resulting wine.

So when Julien bought his first vineyards in Bouzeron, he wanted to plant the best quality plants he could get his hands on.  So he turned to Aubert De Villaine, who, wanting to further promote Bouzeron and help the younger producers, offered Julien vines from his massale selection.  To this day, Julien's Bouzeron is called 'Massale', and is one of the shining stars of the appellation.

Flush with the success of his Bouzeron 'Massale', Julien took on a substantial parcel of Aligote when he set up in the Hautes Côtes de Nuits in 2009.  His Hautes Cotes Aligote is from a large single vineyard named 'Le Village' and is model of what Bourgogne Aligote can be.

Mixed case has 6 bottles of each PLUS Ground Shipping included:

Aligote 'Le Village' 2019 From 50 year old vines in the hills above Nuits St Georges, this Aligote is fresh and spicy with green apple acidity.  Bright, crisp almost crunchy fruit and a deep, floral lingering finish carried out long by the limestone minerality.