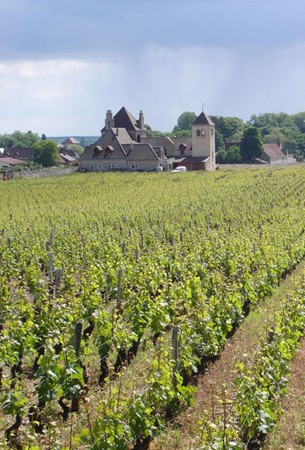 CÔTE DE NUITS
As you drive south out of Dijon and through the suburban sprawl, you come to Marsannay. Off to the right, in the distance on the hillside, you catch a first glimpse of the vineyards of the Côte d’Or. Here begin the ‘golden slopes’, the heartland of Burgundy wine production.

And from here until you hit the limestone quarries at Corgoloin about 15 miles further south, you will traverse arguably the most famous vineyards on the planet. This is the Côte de Nuits, the northern half of the Côte d’Or, and your itinerary will read like a world-class wine list.

Next stop, Gevrey-Chambertin. And if you turn right at the light and wend your way through the village, you will end up on the Route des Grands Crus. From here you won’t need a map. Pass through the grand cru Chambertins and the Clos de Beze towards Morey-St. Denis with its treasures, Clos de la Roche, Clos St. Denis, Clos de Tart.

You are in a vein of rock here that produces some of the finest red wine in the world. Carry on to tiny Chambolle-Musigny with its Bonnes Mares and Les Musigny, and out the other side to the Clos de Vougeot and the Echezeaux. It’s one legendary piece of land after another until you reach Vosne-Romanée and the pilgrims’ destination, Romanée-Conti.

On to Nuit-St.-Georges which gave its name to the Côte de Nuits, and where traditionally the region’s business was transacted. It’s a pretty little town, but most of the attention here is turned towards the land around. As we pass into the no-man’s-land of hard rock quarries, you note that we drove that distance in under a half an hour; and that was with gawking tourists.

It puts Burgundy into perspective. World famous wines. Such tiny villages. Such a narrow strip of land.

Includes 3 bottles of each PLUS GROUND SHIPPING INCLUDED

Domaine Jean Fery Morey St Denis 2016
Morey St Denis is an epicenter. With five Grand Cru and twenty 1er Cru parcels, this is some of the prime real estate in Burgundy. There is hardly an iffy vineyard in the village. And these are some of the most refined wines of the Cotes de Nuits. This village AOC from Domaine Jean Fery has black fruits that impose themselves, sweet and round, in a structure that is typical Morey minerality, with a freshness bred of fine tannins and good balance.

Marchand-Tawse Bourgogne Blanc 2018
From parcels around Savigny-les Beaune, Pernand-Vergelesses and the Hautes Cotes de Nuits, this is a cuvee designed to show Pascal Marchand’s vision of Chardonnay. Floral, with that Corton Mountain minerality, great acidity that makes it mouth-wateringly juicy and open. It’s ready. A lovely image of white from the middle reaches of the Cote d’Or.