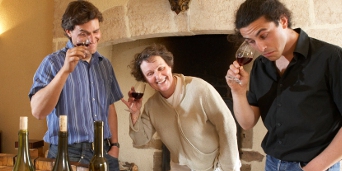 This is a story that goes back to the origins of Elden Wine.  We met Charles du Besset from Château Cary Potet at one of the earliest Grands Jours de Bourgogne.  We fell in love with his beautiful and luscious Montagnys, but also with the character himself.  Charles was a man from another era, tatty aristocracy in a romantic chateau in a beautiful part of southern Burgundy.  The real deal.  We learned much about life and wine in his presence, even if sometimes he would grow impatient with our youthful impetuosity and ‘American’ ways.

And then one day, we lost him.  And our lovely Cary Potet Montagny seemingly dissolved with him.

We always thought that someone would take the reins of the domain, and that we would rekindle our relationship with the property. But a decade passed, and we heard nothing.

Then one day we were in a supermarket, of all places, and there was the Cary Potet label, just as we had known it all those years before, but with the latest vintage tagged on it’s collarette. And theer, in the fine print was marked ‘Produced by Chateau de Chamilly’.

For the past few years, we have sold the wines under the Chateau de Chamilly label.  But we are very happy, and a bit nostalgic, to at last have Cary Potet back on our list.

The Chateau de Chamilly sits in a verdant hidden valley in the very north of the Cote Chalonnaise, 20 minutes south of Beaune. It was built in the 17th century, raised up on the foundations of a 14th century fortified farm.

It was bought by the Desfontaine family, the present owners, at the beginning of the 19th century, including the surrounding farmland. The Desfontaine family can trace its vineyard and winemaking ancestry back at least 12 generations. They are understandably attached to the old stones, the land and the life and hard work that goes with it. Their motto is ‘Ex Nihilo Nihil’: Nothing comes from Nothing.

Today, Xavier and Arnaud work with their mother Veronique to produce wines primarily from the Cote Chalonnaise, Mercurey and Montagny

They describe their primary work as limiting as much as possible the traditional treatment of the vine. They are not actively looking for an organic farming certification, because they believe that the subject is so vast that their work would be impeded. They prefer their own instincts to any codified system.

They are adamant that each vineyard and thus each wine is different.  So their goal is to keep things simple and healthy, and let the vineyard express itself. The very notion of ‘terroir’.

Harvest is done by hand, and there is always a careful sorting of the grapes before they enter the winery.

The whites are raised for 18 months. 12 in French oak and 6 ‘en masse’ (in tanks) to allow the wines to meld. The percentage of new oak is a function of the perceived richness of the wine and vintage.

They are looking for Pinot Noir that is fine and elegant. And Chardonnay that is pure and frank.