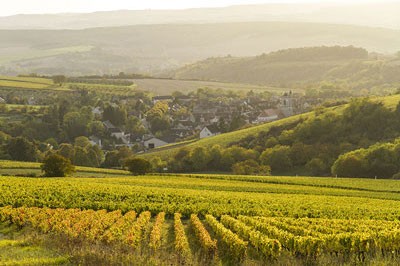 On slopes above the Yonne river valley 15 km from Chablis, a handful of winemakers are growing Pinot Noir at the northernmost limit of its possibility. While Chablis, of course, is famous and white, Irancy has always been red and has always lived in the shadow of the more famous red Burgundies to the south. But since Irancy officially earned its ‘village’ appellation in 1999, something remarkable has happened. Irancy has found its terroir, and it’s an exciting expression of Pinot Noir; it represents an affordable and worthy alternative to big-name wines of the Côte de Nuits, not some pale imitation. Interestingly, the AOC was granted for red wines made from Pinot Noir, with a permitted addition of 10% Cesar grape—dark and tannic, it’s used to bring color and a little backbone to Pinot Noir when needed, and has been grown in these vineyards for hundreds of years. For the visitor there is much to admire here; the village of Irancy nestles at the bottom of an impressive amphitheatre of hills, which protect the vines from the harsh northerly winds. There is also a grand church and a house which belonged to the architect of the Paris Panthéon. And nearby is the village of Saint Bris. In wine-making geography, Irancy is on the border between still and sparkling. Champagne is the region just to the north, and it thrives on the serendipitous discovery that under-ripe acidic wines can be made to hold bubbles. The flip side is that still wines made from Pinot Noir often struggle to mature. But as Irancy found its ‘terroir’, it also found its voice: a balance between acidity and fruit, a lovely, lacy, ethereal expression of Pinot. Irancy’s terroir is similar to that enjoyed by Chablis; a typical cool climate, with snows in winter and frosty springtime—and of course, the same soils full of fossilized oyster shells which allow the vines good drainage, and impart the famous flinty minerality to the wines.

Irancy is a red wine made from Pinot Noir grapes. But winemakers may choose to include in its composition up to 10% of César, for the reasons listed above. César alone is dark crimson, whereas pure-Pinot Irancy tends to be a more delicate ruby. It is uncanny how this wine has aromas of the same cherry variety that is grown in the hills in and among the vines. Sometimes floral or peppery, Irancy at its best is marked by well-defined structure and good acid balance. For all their finesse, these can be wines slow to open, as tannins melt into a velvety roundness. Irancy can be either solid or lacy (pretty much depending on the presence or absence of the Cesar grape), so matching them with food is a case-by-case decision. More tannic, young Irancy would match grilled, even barbecued meats. The more delicate versions are excellent with charcuterie: pâtés, terrines and saucisson. The cheese board could include almost any of the regional cheeses: Coulommiers, Brie de Meaux, Chaource, Langres, Époisses, Soumaintrain.