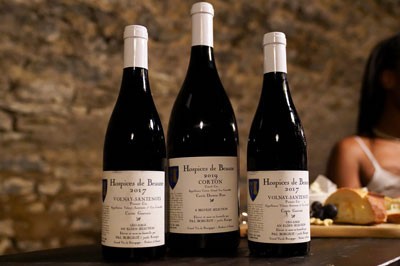 In Burgundy, it’s true to say that charity begins at Beaune. The well-known charity auction at the former hospital – the Hospices de Beaune – rightly attracts a lot of interest, combining its philanthropic efforts with an impressive wine estate. In the current climate, these activities have probably never been more important. At these auctions, wine is bought ‘En Primeur’—by the barrel, prior to bottling or aging, in anticipation of its future character and value. A ‘futures market’ for wine, in other words. It’s not an easy thing to do well; the wines on offer are usually only a few weeks old, and many variables will dictate how they turn out, and how well they will age. Wine is usually a matter of the heart, where emotions and memories dictate what we buy and from whom, but sometimes our heads can also come into it—and these auctions let both the head and the heart decide on which wines to go for. The sums of money raised for charity at the auctions are not insignificant; several million euros were raised recently for the Institut Pasteur hospital. The sales are usually dominated by red wines, but a single white which recently went under the hammer certainly raised more eyebrows – a 1er Cru Les Terres Blanches Cuvée Pierre de Pême, sold for €54,000. A Burgundian icon and capital of Burgundy's wine trade, Beaune takes center place on the world stage during the annual Hospices wine auction. The Hôtel-Dieu with its Flemish tiled roof, the huge silent cellars of the negotiants' houses, and the wine-growing domaines of the district all attract lucrative tourism. The Beaune vineyards are among the most extensive of the Côte d'Or. The appellation Beaune includes an astounding 42 Premiers Crus produced within the commune of Beaune itself. There is much variation in the appellation Beaune. Differences appear from parcel to parcel, depending on the location. Generally, wines from the northern end of the commune tend to be more often intense and powerful, and those from the southern end are smoother and fuller.

The whites tend to be a viscous gold flecked with green. You often get almonds, dried fruits and white flowers in the nose. They may be enjoyed for youthful fruitiness but will age admirably, especially in the better Premier Cru vineyards. Beaune whites in their youth have a flowery freshness making them a good match for poultry and veal in creamy sauces, and for grilled sea-fish. When older and fleshier they enfold cheeses such as Cîteaux, Comté, and creamier goat cheeses.

The reds should be a luminous scarlet color, with classic Pinot aromas of black fruits (blackcurrant, blackberry) and red (cherry, gooseberry) with notes of humus and wet undergrowth. When older, secondary aromas of truffle, leather, and spice develop. Younger Beaune reds give the impression of biting into a bunch of fresh grapes, firm and juicy. Reds from Beaune tend to be fleshy and generous, and the best can show great aromatic power and solid structure. So we partner them with firm gamey meats such as feathered game, roasted or braised. For cheeses choose the more 'gamey' style too: Époisses, Soumaintrain, Munster, Maroilles.