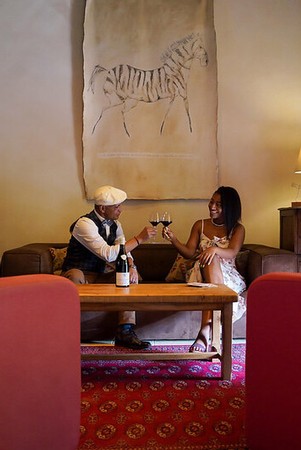 2019 changed parts of Burgundy forever. The Maranges in particular.

It's not a coincidence.  Although the 2109 vintage itself is exceptional, it's the coming of age of these vineyards and these domains that is making everyone stand up and notice.

We have been working with the Domaine Regnaudot for years. They are meticulous in their vineyard work.  Long winter preparation is not the most glamorous part of winemaking, but it is essential.  And literally nipping the yields in the bud come springtime is also critical. At the height of the growing season, their vines look like textbook versions of ‘cordon de royat’ pruning: perfectly aligned grapes, evenly spaced, with just enough leaf cover  to protect the fruit but not so much as to risk rot. Harvesting is done by hand, of course.  And spirits are high because the quality is there.

Take a 12 bottle mixed case (4 bottles of each) and it's $448 delivered to your door! That's less than $38 a bottle for an historic vintage in an appellation that is all of the sudden the chou-chou of the Burgundy wine world.

Domaine Regnaudot Maranges 1er Cru 'Clos des Loyères' 2019
This much-awarded wine, from an appellation you have probably never heard of, is the standard-bearer for the Maranges. When we first arrived in Burgundy, neighboring Santenay was considered rustic and undrinkable. All that has changed. And now it’s the turn of Maranges to come into the fold. Producers like the Regnaudots have been making it happen for a decade now. This premier cru ‘Clos des Loyeres’ is black cherry in color and black cherry in flavor, which is considered typical of the vineyard. It’s a gutsy wine, full-bodied, round and balanced. There’s a touch of cocoa on that fruit that is persistent right through to the finish. A classy example of what Maranges can be. You have to try this.

Regnaudot Maranges Les Saugeot 2019
Here’s a wine with character. The color is bright and garnet red.  Intense, wild and fruity, with those Burgundian notes of damp forest floor. The attack is sappy and aromatic with good structure. A little stocky in its youth, it will round out with maturity.

Domaine Regnaudot Hautes Côtes de Beaune 2019
Dark red with fresh red fruit, firm and dense with good acidity, early notes of candied fruit. Young and exuberant. Drink it now, or hold it to see what the secondary aromas do to a wine of this depth.