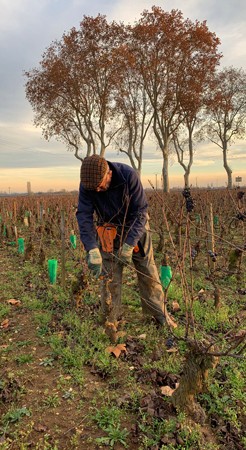 He’s tucked into his 90s, though you would swear he’s 60-something. He’s fit and lean like Ghandi, with big weathered hands, colossal exuberance and enormous strength of character. With more than 60 harvests under his belt, the man is larger than life.

Domaine Michel Arcelain is made up of parcels of vines inherited over a number of generations, as well as vineyards purchased by them over the years. These vineyards (with the exception of a small parcel in Chardonnay) are all Pinot Noir of the highest quality, known as Pinot Fin.

The selection of quality vines was primordial for the domain... and, to add to his résumé, Michel Arcelain is one of the few Burgundian producers who still retains a portion of each harvest to allow it to age properly (to its ideal age, up to 10 years) in his cellars.

Includes 3 bottles of each RED wine Plus Ground Shipping Included:

Domaine Michel Arcelain Pommard 'Clos Beaudier' 2012
The Arcelain Pommard 'Clos Beaudier' is a tiny production, a single-vineyard cuvee that Michel always sets apart from his other Pommards, almost as if it were a premier cru (and I think he sees it that way!). The greatest fault in the 2010s is that they are so charming so early; they risk being drunk up before they really have a chance to show what all the fuss is about. Translucent ruby, earthy bright, pure and powerful, with elegant notes of orange and spice, and complex length. This is a wine to buy by the case: drink a bottle a year over the next 12 years and watch a real Burgundy unfold.

Domaine Michel Arcelain Pommard 2012
Intense aromas of blackberry, black currant, cherries and licorice. A fist in a velvet glove, fine but dense; more structured than you sense at first. Warm and round and long.

Domaine Michel Arcelain Beaune 1er Cru 'Clos des Mouches' 2016
Even though the best-known Beaune 'Clos des Mouches' (from Domaine Drouhin) is a Chardonnay and sits on a pedestal on the world stage, most Clos des Mouches is red. The best known, and arguably the best parcel of vines on the slopes above Beaune, it can be either white or red. So put Michel Arcelain's perfect Pinot vines in a vineyard of this caliber, and you get something special. Michel comes from the old school. He thinks that women like his Clos des Mouches and men like his Pommard. But be real! What he really means is that his Clos des Mouches is elegant, lacy and fine, fresh and floral, with impeccable balanced intensity.  And it is!  This is an example of meticulous winemaking in a world-class parcel of vines.

Michel Arcelain Bourgogne 2016
This Bourgogne will stop you in your tracks.  Like so many regional appellation wines from small, proud production domains, the grapes for this wine come from a vineyard in the village where the producer lives and work.  In this case…it’s Pommard. This is no big-volume blend Bourgogne like you get from the negociant houses.  No, you’ll swear that this is a little Pommard.  And that’s how it should be!