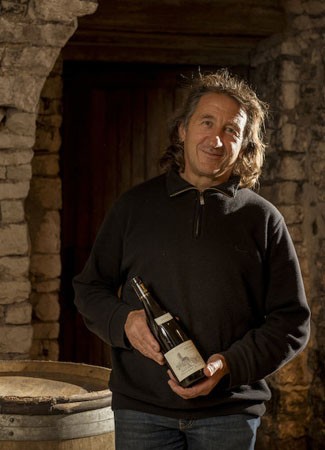 Irancy has always been red and has always lived in the shadow of a bigger Burgundy. But in the 20 years since Irancy earned its village ‘appellation’’’ (before 1999 it was labeled ‘Bourgogne’ with the mention ‘Irancy’ allowed in smaller script), something remarkable has happened. Irancy is being made as Irancy… and not as a pale imitation of a big-gun Cotes de Nuits. Banal as that may sound, it required a dramatic shift in the thinking of this tiny farm community.

On slopes above the Yonne river valley, 15 km from Chablis, a handful of winemakers have been cultivating a reputation for red Burgundy at the northernmost limit of possibility...and Thierry Richoux has been their locomotive. Now the time has come to pass the baton.  Thierry's two sons, Gabin and Felix, have taken the reins, and are following in their father's prodigious footsteps.

Gabin and Felix Richoux Irancy 'Veaupessiot' 2012 and 2014
This is Pinot Noir in a style all its own, with delicate cherry fruit and brooding minerality. This single vineyard 'Veaupessiot' sits on a point over looking the river valley with perfect exposition. Gabin and Felix Richoux holds back their wines until they feel they have developed enough.