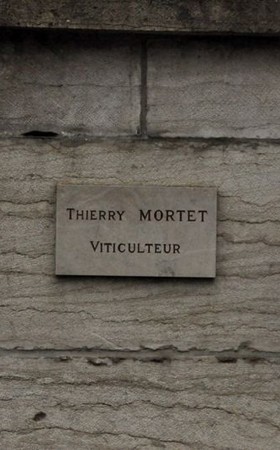 We first met Thierry Mortet at one of the early editions of the ‘Grands Jours de Bourgogne’ where the theme of the Gevrey-Chambertin tasting was the two distinct village appellation zones on either side of the mouth of the Combe Lavaux. Tasting at Thierry’s stand was a master class in the subject that is as clear today as it was twenty years ago.

Thierry Mortet took over his half of the family domain, Domaine Charles Mortet et Fils in 1992 with 4 hectares of vines. He now oversees 7.3 hectares (just under 17 acres) of production, 6 ha in red and the rest in white, for an annual production of 30-35000 bottles. When he officially converted his domain to organic agriculture in 2007, he was merely codifying practices that he had already been following for years out of respect for the environment and an understanding of the cultural significance of his work.

This 12 bottle mixed case of REDS includes 3 bottles of each PLUS ground shipping included:

Domaine Thierry Mortet Bourgogne Rouge 'Les Charmes de Daix' 2017
Thierry Mortet produces about 6000 bottles a year of Bourgogne Rouge from six different parcels making up about 2.5 acres. This means there is great diversity in the strains of Pinot and the age of the vines, producing a wine with contour. Deep, dense and brilliant, its smoky spice opens to fresh black cherry sweet fruit with a charcoal edge. Delicious and luscious.

Domaine Thierry Mortet Gevrey Chambertin 2017
If you thought the ‘assemblage’ of the Mortet Bourgogne Rouge brought lots of different Pinot Noir strains to the cellar, get this: this Gevrey-Chambertin village is made from grapes from 20 different parcels of vines in AOC Gevrey-Chambertin! It would be hard to find a more representative example of Gevrey village’s famous diversity. Pure and open, intense blackberry and black currant, a touch of licorice. You’ll want to try it now, but keep it a few years more and you’ll be rewarded.

Domaine Thierry Mortet Gevrey Chambertin 'Vigne Belle' 2012
This single vineyard village Gevrey-Chambertin is not called ‘Vigne Belle’ (beautiful vine) for nothing. This vineyard produces one of the finest expressions of Gevrey-Chambertin ‘terroir’ in the AOC zone. The domain produces about 3000 bottles a year of old vine wine that is subtle and complex, suave and voluminous. A gem in Gevrey.

Domaine Thierry Mortet Chambolle-Musigny 1er Cru 'Les Beaux Bruns' 2012
‘Les Beaux Bruns’ is a premier cru vineyard on the lower slopes of the eastern part of Chambolle-Musigny, right in the mouth of the Combe de Chambolle. The Domaine Mortet produces about 1200 bottles there a year. This one is slow to age. Buy it for laying down and your patience will be rewarded. ‘Beaux Bruns’ is structure and length, but with great finesse.  Suave in its attack, it builds to a powerful finish.