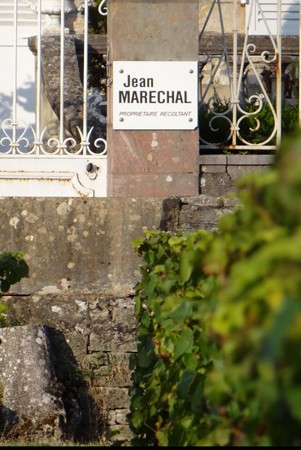 Despite the fact that the Domaine Jean Marechal has been making wine in Mercurey from father to son since 1570, they are not so widely known as some of the other producers in the appellation. Which suits us here at Elden selections just fine.  Whatever reason for the domain remaining undiscovered in this generation, we are here to report that this is one of the shining stars in Mercurey.  Following in the footsteps of the current appellation locomotive, Bruno Lorenzon, the Domaine Jean Marechal is producing top flight wines that are fine and elegant.

Real World Class, Insider Burgundy. ONLY Available in the US from Elden Selections! Includes 12 Bottles Plus GROUND SHIPPING INCLUDED:

DOMAINE JEAN MARECHAL BOURGOGNE 2017
Assembled from wine from two different parcels of appellation Bourgogne that are situated in the limits of Mercurey, you could call this a ‘little Mercurey’, the terroir and black fruits so resemble the village appellation. Severe pruning limits the yields (45hl/ha) reinforces the deep Pinot character of the fruit.