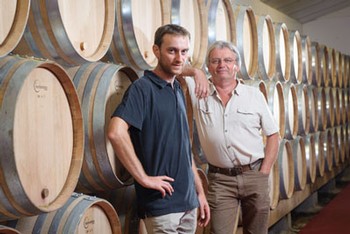 Domaine Alain Vignot in the very rare appellation Bourgogne Côte Saint Jacques. And we present a selection of their wines that fall into our 'Under $35' range. Perfect for summer drinking!

Don’t be surprised if you have not heard of the appellation Bourgogne Côte Saint Jacques. There is very little of it, and there are very few producers. Alain Vignot essentially invented the appellation in 1975 after years of proving the worth of the distinct terroir of the hillside at Joigny, above the river Yonne in the furthest-northwest part of Burgundy.

Here's your chance to be the first in the US to have these wines in your cellar.  Yes, that's right, this is an Elden exclusive.  We are the only US importer.

We propose a 12 bottle mixed case, 3 bottles each of:

Domaine Alain Vignot Bourgogne Cote Saint-Jacques Rouge 'Les Ronces' 2019
This single-vineyard Pinot Noir comes from the best parcel on the Cote Saint-Jacques, giving Les Ronces a structure worth laying down.  Surprising depth for a wine from the northernmost part of Burgundy.

WHITES
Domaine Alain Vignot Bourgogne 'Collinieres' 2020
This wine is unique, Domaine Vignot are the only producers. Made from a blend of two grape varieties: Pinot Blanc and Chardonnay, it draws its aromas from the smoky terroir of the Côte Saint Jacques.

Domaine Alain Vignot Bourgogne Cote Saint-Jacques Vin Gris 2020
This is a real Pinot Gris, a serious food wine which offers a complex aromatic palette due in large part to its flinty terroir. It is called ‘gray’ wine because of its incomparable color, likened to a ‘partridge eye’, (l’oeil de perdrix) found in some classic expressions of champagne.