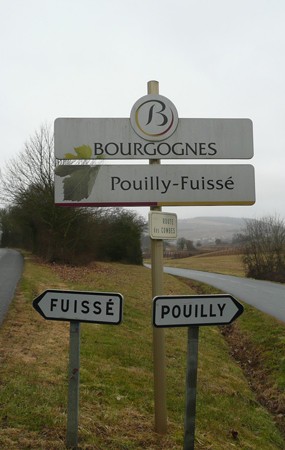 Have a read in the notes at the bottom for facts.  But today, I'm more interested in giving you the vibe.  There's great excitement in discovering new young producers.  And these guys, Stephanie Saumaize and Pierre Laroche, seemed to come, fully formed, out of nowhere.
The Domaine de Château de Vergisson takes the complex terroir of the Pouilly-Fuisse zone and makes it clear and simple.  By means of precise, tight winemaking, but also because it's in their bones.

They make quite a few versions of the stony minerality that lies between the rocks of Solutre and Vergisson. And here are two excellent examples in a 12 bottle mixed case PLUS ground shipping included:

Chateau de Vergisson Saint Veran 'La Coste Rotie' 2017 (8 Bottles)
In ‘La Cote Rotie’, Saint-Veran gets serious. The vineyard is situated at the base of the Vergisson rock, so there’s no lack of limestone, which brings with it finesse and subtlety in the nose, and a rich, lemony, mouth-watering saline fruit which is carried on and on to an elegant mineral finish.

Chateau de Vergisson Pouilly-Fuisse 2017 (4 bottles)
These are vines from Stephanie’s part of the valley, assembled from several parcels from the base of the rock at Solutré. This is classic Pouilly-Fuisse. Pure gold, with lemon-drop fruit, a touch of tannin to give it structure, and lovely acidity.  So round and balanced, you want to chew it.

About the Producer
After having taken over their family vineyards, Stephanie Saumaize and Pierre Laroche created the Domaine du Chateau de Vergisson in 2012, and were soon turning heads in Pouilly-Fuisse and the Maconnais. The young couple are from two different families of grape farmers, Stephanie from Solutre and Pierre from Vergisson, villages that sit at the base of the dominant limestone outcrops that mark both the terrain and the terroir of Pouilly Fuisse.

Neither family made wine, however.  Rather they sold their produce to negociant houses in the area. So when Stephanie and Pierre took over the vineyards, renovated the Chateau de Vergisson as their home and winery and started bottling under their own label, they appeared to come out of nowhere. And for us, it is a match made in Elden wine heaven!